Why 3M™ HFE Novec™ Engineered Fluid is the best solvent:
A brief history of cleaning solvents

In the 1980’s and prior, Freon TF (CFC-113) or Freon TMS (TF + 5.7% methanol) was the workhorse solvent for precision cleaning and vapor degreasing. It offered the following advantages:

However, it was a slightly weaker solvent compared to other chlorinated solvents (TCE, Perc, 1,1,1 Trichlor).

Then when the CFC’s were banned in 1992 due to ozone depletion factors, AGC Chemicals introduced the AK-225 line (AK225 MSDS) of HCFC’s (hydrochlorofluorocarbons) and DuPont introduced the HFC’s (hydrofluorocarbons). The AK-225 HCFC products, which contain chlorine on the molecule, were much better cleaners compared to the HFC’s. Therefore, the AK-225T solvent (boiling point 129°F) was the closest match to the previous Freon TMS (boiling point 105°F) with other very similar chemical and non-flammability properties. However, it did have very minimal ozone depletion potential of 0.02 compared to CFC-113 of 0.8.

At the time, it was the best drop-in replacement with reasonable pricing and toxicity values. Much political infighting was taking place at the U.S. Environmental Protection Agency (EPA) with all the chlorinated and other solvents hoping to be the best available. Since ozone depletion was the primary focus at the time, the EPA said they would allow the AK-225 HCFC but mandated phase out on January 1, 2015. 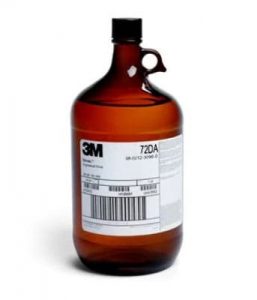 Enter the 3M™ HFE (hydrofluoroether) products as a drop-in replacement for AK-225. The high molecular weight of the HFE chemical means that it remains in the atmosphere for less than two weeks, and has zero ozone depletion potential (ODP). The 3M™ HFE chemistry also offers low GWP (global warming potential).

The evolution of more environmentally-friendly cleaning solvents has developed into excellent cleaning chemistries with little to no impact on the environment and employee exposure.  Although the EPA push away from chlorinated solvents was difficult, it has led to much safer chemistries with similar cleaning effectiveness and power.