The newer generation vapor degreasing solvents are more “environmentally and operator friendly” and more companies are finally shifting from NPB (n-propyl bromide) and TCE (trichloroethylene.)  However, the newer HFE/HFC solvents are typically weaker solvents that do not remove heavier oils, grease, flux or wax as well with the removal of multiple chlorine and bromine atoms that provided the increased solvency.   Some companies have restricted any use of chlorinated solvents in the degreasing process where they are often added to the HFE/HFC solvents due to previous environmental regulations, public perception, or possible employee safety concerns. 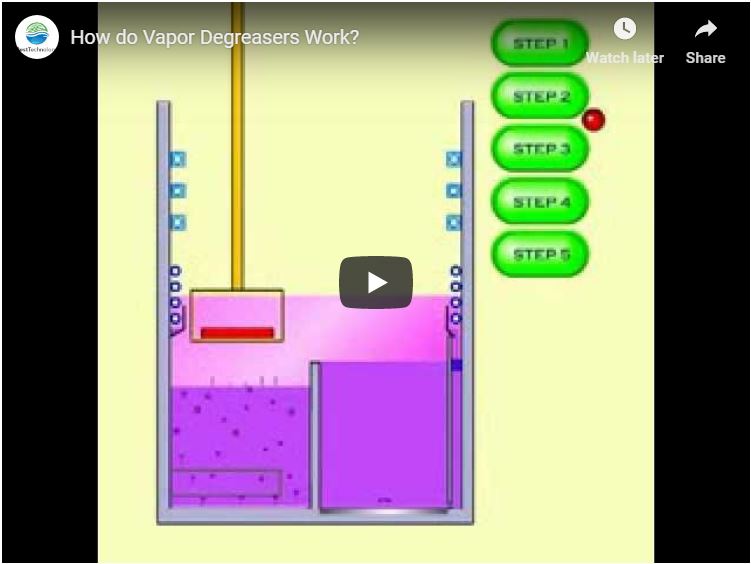 The newer bi-solvent and co-solvent options allow for a much more targeted approach for a specific application similar to a rifle vs. a shotgun analogy. Some degreasing process applications require a “limited solvency” that will dissolve specific soils such as flux without attacking electronic components. Other applications require higher temperatures to “re-flow or melt” waxes or fluorinated greases.  The “bi-solvent/co-solvent” process allows the use of specific “primary” solvents to target specific soils that are then rinsed off with a clean, non-flammable solvent that is constantly “re-distilled” in the vapor degreaser.

In a “co-solvent” process, the “primary” solvent or solvating agent is mixed into the boil sump of the vapor degreaser equipment, along with the rinse agent. Parts are first immersed into the boil sump for primary cleaning of specific soils and then moved into the clean rinse sump with nearly pure “rinse” agent for “rinsing” of the parts followed by a clean, distilled vapor rinse. 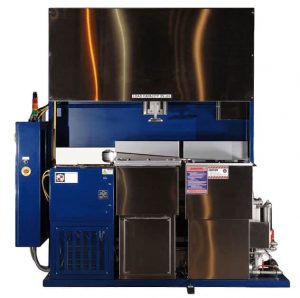 A “bi-solvent” process (as shown in the video clip below) utilizes a separate “primary” solvent “pre-clean” station to dissolve specific soils such as flux, grease or wax and then followed by a vapor degreasing solvent rinse with clean, distilled solvent. (Note: the video shows the equipment process but no solvents in the process tanks.)  The “pre-clean” primary solvent tank can be heated to higher temperatures for specific purposes, however, it must remain thirty degress lower than the flash-point for safety reasons.  Many unique solvents can be used in this application with specific properties.

(Note: the video shows the equipment process but no solvents in the process tanks.) 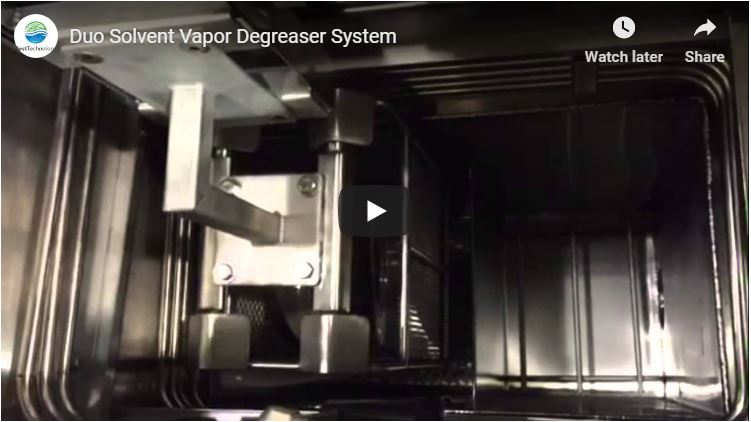 Why not just do this with water? Vapor degreasing offers many advantages for precision cleaning such as small footprint, low energy costs, fast cycle times, spot-free parts, low surface tension wetting, and high solvency for non-polar oils, greases, waxes and flux. These results are sometimes difficult to replicate in an aqueous process.